(CSC) 1. Great to catch up with you! This Christmas season, youre hitting the road with very special guest Kellie Pickler. Tell us about the concept behind this pairing and how you two first met!

(Phil Vassar)
I met Kellie years ago. We were both on the same record label for a long time. We got to meet and weve done shows together over the years. I just love her, shes a great artist, a great singer, shes funny and shes real. Theres nothing phony about her; I love that about her. Shes truly awesome!

When I was talking about this Christmas tour, I said You know, Kellie would be great. That way we could do some duets and all that fun stuff. So, I called her up and she said yes! Its a lot of fun and I am really enjoying myself. We just started the tour, so we are really pumped up and making the show as fun as possible. I really love this tour. Its really fun and something different!

(CSC) 2. Without giving away too much, what kind of a show have you created for the fans? Are you and Kellie performing some of your greatest hits in addition to Christmas songs?

(Phil Vassar)
Absolutely. We do our hits, some duets together, some Christmas songs ourselves, she plays, I play and then we perform together. We are really mixing it up in this show and take turns coming and going off the stage! We start the show together which is fun, because Ive never done anything like this before. It has really been exciting to be able to do something different like this.

Ive had a long career and done a lot of things, but this is the first time Ive ever done something like this! Kellie is such a delight to be around and she is so great. Its a real pleasure working with her. Ive been on the road with so many people, and sometimes its hit or miss. Kellie is a kind person, and shes kind to everyone. There are a lot of artists that arent (laughs), you know that. Some artists are camera on one way and camera off another way.  Kellies not that way, shes a genuine, wonderful human being. I instantly felt comfortable around her.

(CSC) 3.  You recently recorded a Christmas duet, The Naughty List and filmed a 40s- style theme music video with Kellie. Its almost a throwback to Kenny Rogers and Dolly Partons Christmas Without You. On that note, you both have done shows for the USO. How was it having our service men and women in the video?!

(Phil Vassar)
We are both such huge Kenny and Dolly fans. Matter of a fact, we actually do a Kenny and Dolly song in the show. Kenny was one of my heroes growing up, and then low and behold Im out on tour with him for a couple years at the very first part of my career. He took me under his wing and Ive really enjoyed that friendship throughout the years. Kenny is a wonderful, wonderful man. Dolly Parton is one of my favorites; I grew up with Kenny and Dolly. This tour with Kellie really does kind of remind me a lot of that thing Kenny and Dolly had. Dolly and Kellie just have this little bundle of energy, personality and talent. I feel like Ive really learned a lot from Kenny in my life and career. I really love your comparison, I really do, it doesnt bother me at all.

Kenny inspired me to do this Christmas tour. Hes been doing his Christmas tour for many years. He is out there right now doing shows with Linda Davis and theres no better than her. As talented as Linda Davis is, shes an amazing person. I love both Kenny and Linda dearly. I cant say enough about either one of them. Its hard to believe that Kenny is finally winding down. I cant even imagine how many shows hes done in his lifetime (laughs)!

(CSC) At least hundreds of thousands?!?

(PV) Its amazing to try to even comprehend it. He is one of my heroes for sure, hes the reason I do what I do, and definitely one of the reasons I love country music. When he came out with The Gambler, it blew my mind.


As for the second part of your question, both Kellie and I have done a lot of work for the USO and continue to. Im playing the USO ball in December in New York City, which I am really excited about. Kellie does a lot for the USO all over the world too, so we both have a big place in our hearts for the service men and women. We understand their sacrifice, or at least try to. Were on the road and tour all the time, but these folks make us stop and think, they humble us. It was really fun having the opportunity to see these folks for the filming of the music video.

When I was writing the song, it just felt like an old sort of a throwback to the old era, the old forties big-band song kind of thing. Kellie and I talked about the video concept and we both agreed on it and then we did it! Im really proud of how the video turned out. My good friend Andrew Rozario directed it and did a wonderful job.

(CSC) 4. What does it mean to you personally to honor God and country by supporting our troops?

(Phil Vassar)
Personally, its an honor for me, its a privilege to do that for these folks and be a part of their lives. They are all over the world watching our backs and I just feel like we are so indebted to them, so its really an honor to be able to do it. Some of my most favorite and memorable concerts have been for these service men and women. You just dont get a better group of people. I really love doing those shows for them and I appreciate all that they do for our country!

(CSC) 5. What are some of your fondest Christmas memories from growing up?

(Phil Vassar)
Being with my family, my sisters and my mom. Its still like old times, we were just together for Thanksgiving. Whenever Im with them, time stands still and I love that.

(CSC) 6. What Christmas traditions do you treasure and how do you celebrate Christmas with your family?

(Phil Vassar)
Of course, I am always with my kids. My daughters are growing up so much, Presleys 14 and Haleys 19 now so things are changing so much. We just try to be together as much as we can for these holidays. That is our time to be together; sit in the kitchen, cook, talk, laugh, watch movies, just be together and not even leave the house. We like to get sushi sometimes and then come back to the house (laughs). Its a pretty awesome deal. Being with my daughters is my favorite thing in the whole world. Theres nothing else Id rather do than that!

(CSC) 7. Youve written a lot of hit songs for other artists, including Jo Dee Messinas Bye, Bye. Have you been in touch with her since her cancer diagnosis and if so, hows she doing?

(Phil Vassar)
I have talked to her and Ill tell you one thing, theres nobody stronger or more of a fighter than that girl. I say my prayers for her, and Ill tell you what, shes just amazingly talented also. I know shes just trying to figure it all out and get it all together but shes gonna be alright, that girl is a fighteryou know it and I know it (laughs). Shes going to fight it with all shes got, I can promise you that. I think there are a lot of options, and a lot breakthroughs in that world now. I told her to know that Im there for her and to let me know if she needs anything.

(Phil Vassar)
We are already booking into the summer of next year (2018) and looking at the fall. Were going to Europe again in April, I think were going to the UK in October (2018), it never stops! Were still working on my Songs From The Cellar deal, my T.V. show which has been really great. Weve shot episodes with all types of guests such as Hunter Hayes, Old Dominion, Mike Tyson, Carrot Top, Tommy Shaw (STYX), Steve Cropper and John Rich. We have plans to tape more episodes all over the world. It has been a really cool experience!

Learn more about the tour and purchase tickets here: https://www.philvassar.com/tour.html 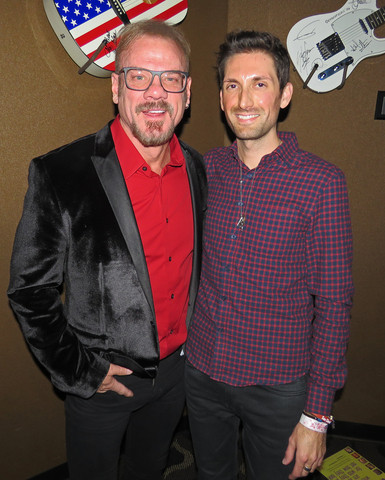